skip to main | skip to sidebar

I have been on the road for a few weeks. I was able to visit my children and grandchildren. It was great.
While I was traveling I had little access to computers and since I got back a couple of days ago I have been busying myself catching up on the news and events.
Here is a story from Truthout that targets the growing use of drones.
The people of Syracuse, in upstate New York, are organizing to stop their city from becoming a frontline war-fighting community.
This will be the first year the Air Force is training more drone operators than actual pilots. The wars are changing. It is easier to develop a racist war policy. If American soldiers aren't in harms way, the American body counts are lower and people are more likely to accept the wars. Meanwhile, when the troops are replaced by drones, the civilian death rate will rise, as we have seen in Afghanistan and Pakistan.
If we can mistakenly kill innocent women and children 300 yards from us, it becomes unimaginable what can happen from thousands of miles away. 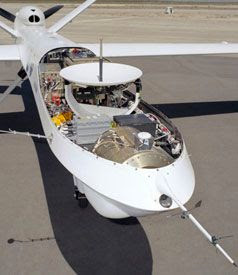 Drone aircraft are being stationed to patrol the US borders with Mexico and Canada.
(Photo: Tom Tschida | wikimedia.com)

If war becomes unreal to the citizens of modern democracies, will they care enough to restrain and control the violence exercised in their name? Will they do so, if they and their sons and daughters are spared the hazards of combat?

The drones are coming. Readers of the Syracuse Post-Standard know that the drones (a.k.a. Reapers) are arriving at the local New York Air National Guard Base at Hancock Airport.
These Reapers are a new level of aerial warfare. They are high-flying, sharp-shooting, 36-foot-long robots. They are crewless - remote-controlled - aircraft. Although they are unmanned, drones do have "pilots." Those pilots operate in front of computer screens in ground control rooms far from any target.
Last year the former congressperson for the district, James Walsh (R-New York), hailed the arrival of the Reaper. Not only will it provide a few jobs, but, Walsh said, this killer allows pilots to be "literally fighting a war in Iraq and at the end of their shift be playing with their kids in Camillus" (P-S, 25 June 2008, page A1).
Drone surveillance covers the US/Mexico and US/Canada borders. In Gaza, the Israeli Air Force uses them to assassinate Palestinians. In its various overseas wars, the US military has come to depend on drones to assassinate humans while bombing vehicles and buildings. Drones preying on Iraq, Pakistan and Afghanistan are piloted from Creech Air Base in Nevada. Beginning this November, Reapers will also be piloted from Central New York.
Because drones seem - in the short term and within narrow contexts - to reduce US casualties, some cheer them on. However - and this is essential - drones make war easier to initiate and perpetuate. The folks back home wouldn't even need to hear about the drones' brave deeds. No thought-provoking body bags - at least not here at home.
Like many other high-tech weapons, drones are indiscriminate: they can kill offensively or defensively, invaders or resisters. They kill combatants and non-combatants, adults and children. Because most victims are civilian, drones are terrorist weapons.
Terror isn't just something "they" do. Perpetrators of terrorism can have dark skin or light, be "Islamic" or "Christian." Terrorists can be state or non-state actors. Terrorist budgets can be scanty or vast. Terrorist weapons can be low-tech or high-tech. They can be launched from land, sea or air.
Like other forms of aerial warfare, drones may well spawn reactive terrorism. Because they kill and maim civilians primarily, drones incite hatred. Such hatred could lead to retaliatory strikes either today or when victims' survivors come of age. Those strikes could target any of the hundreds of US military bases bestriding the globe.
They could also target any of the domestic bases from which the drones are piloted. Like it or not, without the consent of local communities, Central New York is becoming part of the battleground and Central New Yorkers ought to be aware that hosting drones may have blowback.
Besides being indiscriminate, aerial warfare is cowardly. Think about the various devices of aerial maiming and massacre (napalm, white phosphorus, cluster bombs, depleted uranium, cruise missiles). For decades, aerial warfare has been the weapon of rich, powerful, high-tech nations bullying poor, weak, low-tech nations. Apart from a steely will to resist, these latter nations have few defenses. So corrupted now is any notion of military honor that our war-besotted culture no longer even thinks about a "level playing field." Seldom are warplanes used to defend a nation from attack or from threats to its sovereignty. Generally warplanes - robotic or not - are the aggressor, the violator of others' sovereignty.
Drones raise cowardice to new heights. Unlike World War II bombardiers or pilots of other pre-robotic aircraft, drone pilots take no risk. Anti-aircraft artillery will never reach them. They shoot goldfish in a goldfish bowl. The various branches of the service use aerial weapons imagery - invariably phallic - to recruit gutsy, often idealistic, kids. In time, many of them learn the hard way that enlisting has little to do with defending their country, defending "freedom" or spreading "democracy."
Many fail to come home intact. Few find glory, few find honor. Some then realize that only corporations - the institutional mirror image of drones - profit from war.

-thanks to Truthout
Posted by Russell at 12:05 AM

Other reading and listening